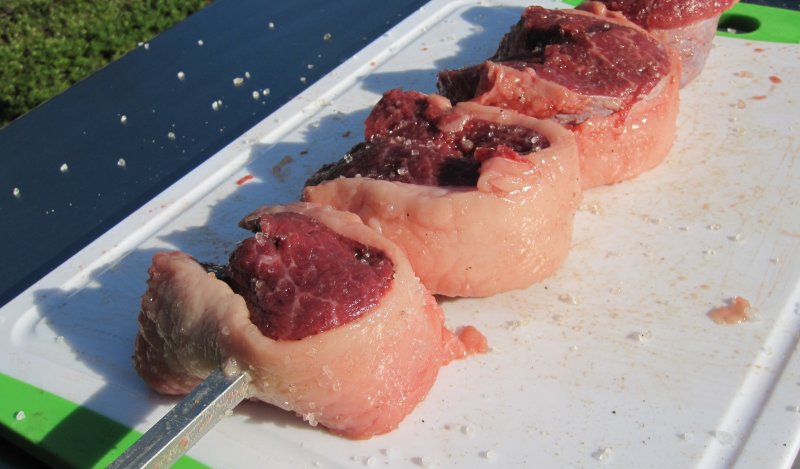 Picanha is known as the king of meats in Brazil as it is the most popular and highest quality cut of meat. The meat is usually lean and capped with a thick layer of fat that adds a ton of flavor when cooked over a flame. In the United States, picanha is not widely known but it can be enjoyed at a Brazillian steakhouse such as Chima, Texas de Brazil, and Fogo De Chão. Outside of Brazil you may find picanha goes by other names such as sirloin cap or the rump cap, or culotte. If your local buthcer or grocery store does not carry picanha, you can always have it delivered to your door from a number of online retailers such as Snake River Farms.

This recipe is simple and all you need is meat, salt and fire! It does help to have an electric rotisserie for your grill however this is not required. The rotisserie method is a common way of cooking picanha and it self bastes the meat while the fat cap melts down. Eating the fat cap is up to you as it is less than healthy but can be absolutely delicious. Some people trim the fat cap to get an even thickness while others prefer to leave it as is. Salt is the only seasoning you need and do not be afraid by the amount used on picahna. The meat will not be ruined or over salty.

First you should trim away any silver skin on the meat side of the picanha. Remove any hanging bits on the sides to give the meat a nice edge. Next, as an optional step, use a sharp knife and trim away any excess fat from the fat cap. Try to leave behind an even amount of fat (about ½ inch) on top of the meat. Traditionally the fat cap should be left alone but some people do prefer to trim down the thicker areas. Next find the direction of the grain of meat and cut a shallow slice along with the grain. Turn the picanha so that the slice with the meat grain is running parallel with your cutting board. From one end of the picanha, measure a three finger width then slice off the first piece. Be sure to cut in a direction 90 degrees of the grain slice. Continue to slice the meat at a three finger width until it is fully sliced. Next season all sides of the picanha with a very coarse BBQ churrasco salt such as Sal Lebre. You can substitute with kosher salt however the grain is not large enough and the results will be different. Traditionally churrasco salt is the only seasoning required however if you are up for breaking tradition, add your favorite steak seasoning.


Next curl up a slice lengthwise with the fat cap facing outward. Push the meat onto the rotisserie spit through the center. Continue with the remaining slices keeping them in a uniform direction. Next preheat your grill with all burners on low. Place the rotisserie spit on the grill and adjust the counterbalance weight. Start the rotisserie motor and close the lid. The rotisserie cook will take anywhere from 30 to 50 minutes depending on your grill and how done you prefer your steak. Stay close to the grill with this cook and be ready to deal with any fire issues caused by the rendering down of the fat cap. Ideally your rotisserie spit will be high enough from the flames to avoid flare ups. Use a thermometer to check the temperatures on the outer edges and also in the thick center. For a nice medium rare center, pull when temps reach 135 F in the center and the outer edges will be around 140 F. Rest the meat for 5 minutes then slice thinly down the spit and enjoy.