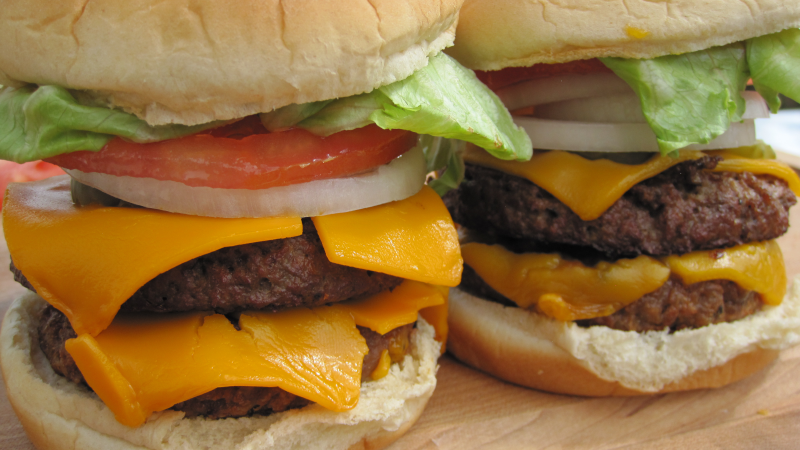 The burger world is changing with new products on the market. This doesn’t mean the end of beef burgers as some vegans would hope for, but it does add new options that were previously unavailable. You can choose to ignore the rise of plant based burgers or you can embrace them full on with this recipe. Here we answer the question of what happens when you combine a plant based beyond meat burger with the Impossible plant based burger. And hey why stop there? Let’s keep the animal free theme going by using plant based cheeses and of course plant based buns. You should watch this video and take a look at this amazing double stack burger made entirely of plants. If this doesn’t convince you that plant based burgers are a legit thing, then tell us why in the comment section.

First, grill the beyond meat and impossible burgers as you would cook a beef burger. Use a low to medium heat and cook about 5 minutes per side. When they reach 165 F place them on the top grill rack.


Add cheese on top of the burger patties then close the lid and continue to cook for about 2 minutes. When the cheese melts, stack 2 patties on a burger bun. 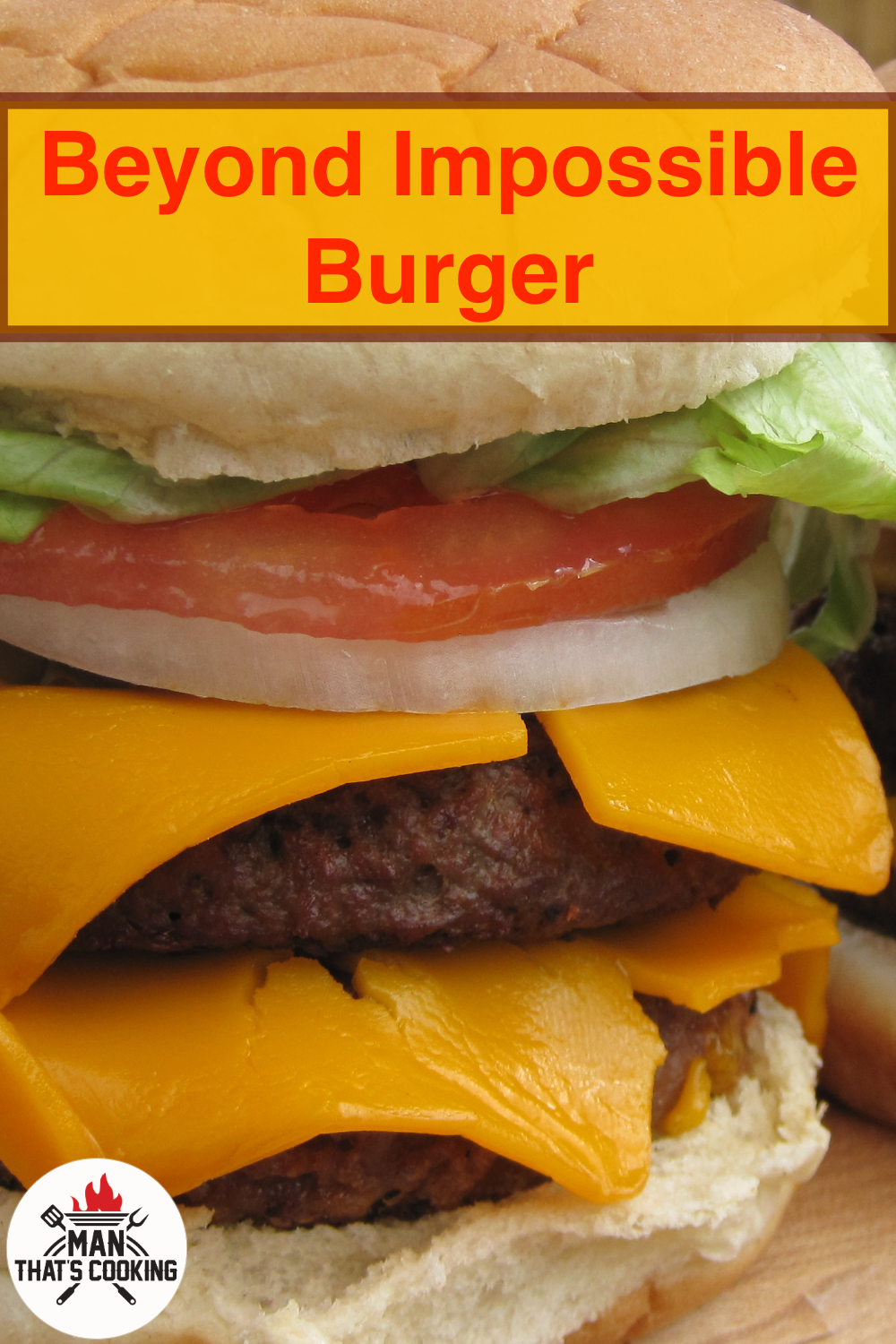 Bacon lovers rejoice, we have a summer cookout recipe you’re going to love! Our bacon cheddar smokehouse burgers combine ground sirloin, chopped bacon and shredded cheddar in a burger patty. This burger is smoked for 2 hours then placed on top of a delicious bacon onion cheddar BBQ spread. Topped with sliced cheddar, bacon, lettuce and tomato it’s a perfect combination.

First, fry up a 1/2 pound of bacon slices on medium heat for toppings on the burgers. When the bacon turns golden brown, move it to paper towels to absorb the grease. Remove the grease from the pan.


Next, slice 1/2 pound of bacon into bits, then cook the bacon on medium heat for 10 minutes or until done. Remove the bacon from the skillet and place it on paper towels to absorb the grease. Keep the grease in the pan.


Add a thinly sliced onion to the pan and cook it in the hot bacon grease for 10 minutes or until browned. Remove the onions and place them on paper towels to absorb the grease.


Remove the grease from the pan, add the cooked bacon and onions back into the pan. Add 1/4 cup of BBQ sauce and about 1/2 cup of shredded cheddar cheese. Reduce the heat to medium low and stir continuously until everything is incorporated together. Move the bacon onion cheddar spread into a bowl and set aside.


Next, slice another 1/2 pound of bacon into bits, then mince the bacon with a sharp knife. Break the bacon down into very small bits, then add it to a mixing bowl. Add the ground sirloin and 1 cup of shredded cheddar. Mix together the ingredients then form 4 half pound burger patties.


Heat up your smoker and set it to a low 150 F and use mesquite wood or pellets. When your smoker reaches temp, add the burgers in a spot that is away from the heat. Smoke the burgers for 2 hours until they reach 130 F.


Apply a generous amount of the bacon onion cheddar spread to the bottom bun. Place a burger patty on top of the spread. Stack some bacon slices on the burger patty. Add a tomato slice and some iceberg lettuce. Finally cover it up with the top bun, and take a big bite! 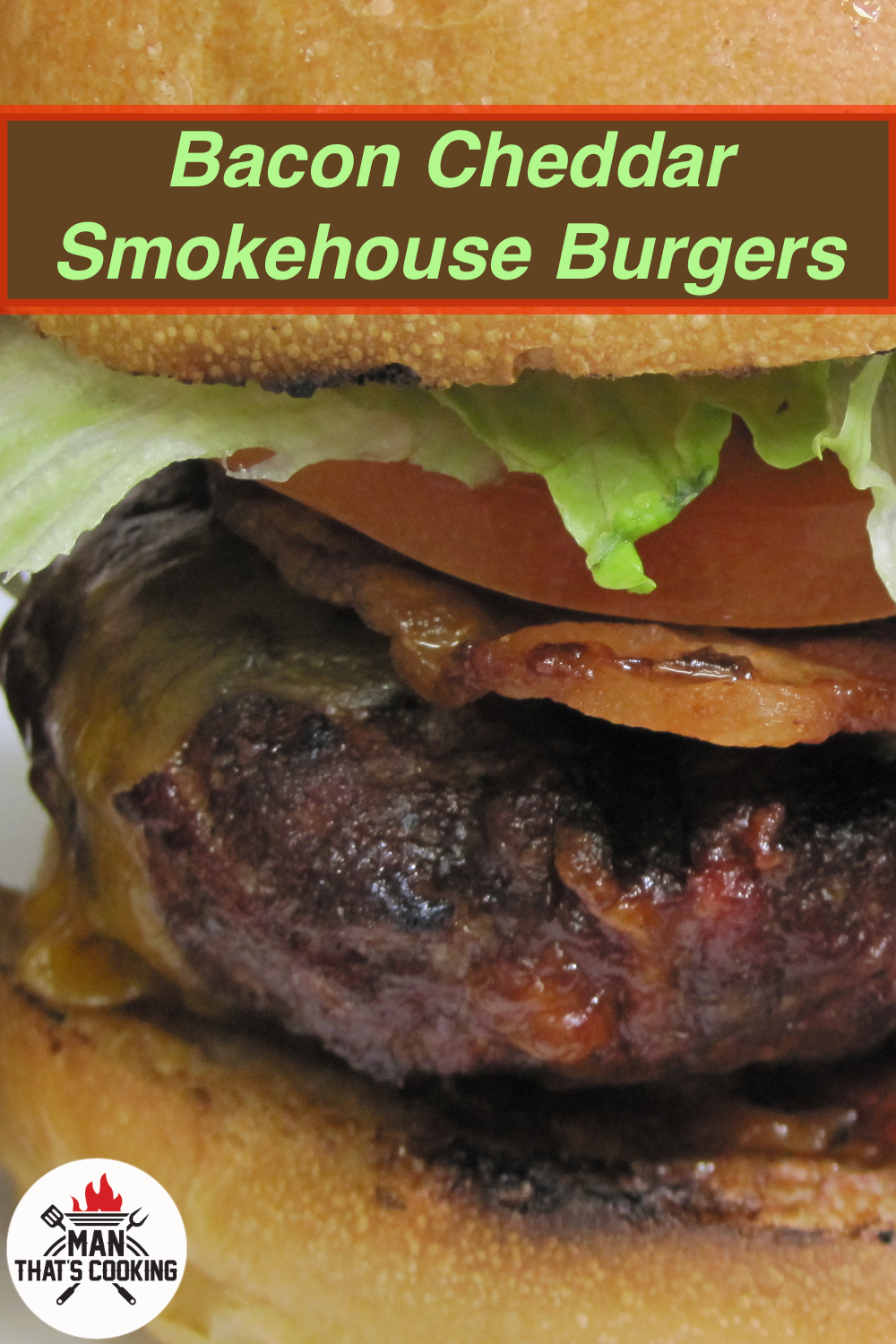 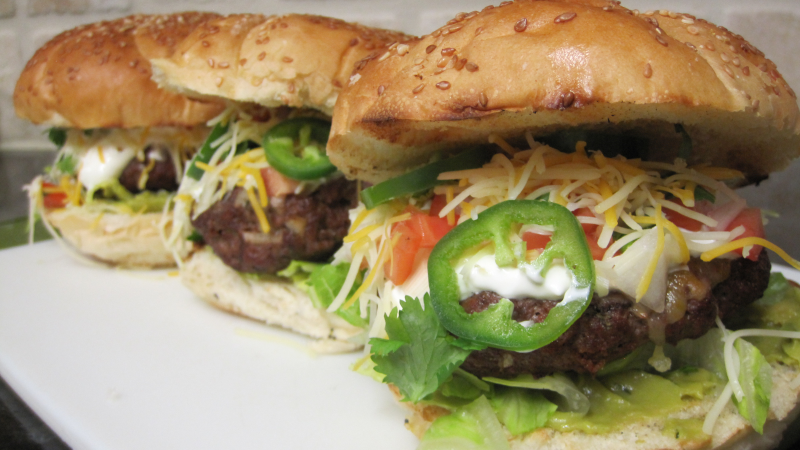 Cinco de Mayo is coming up and we’ve got your BBQ party food covered! Why make traditional corn shell tacos when you can grill up some taco burgers! So try out this delicious recipe for grilled taco burgers and you won’t be disappointed.


Next, add the ground chuck to the medium bowl. Mix the beef, onion, and cilantro for about 1 minute until it is well mixed. Add in one packet of taco seasoning and mix together for another minute. Form the beef into 6 equal sized patties and place them on a cutting board. Add salt and pepper to the tops of the patties.


Next melt 1/2 stick of butter and brush the butter onto sliced keiser burger buns.


Preheat your grill to 400 degrees and then turn down all burners to low temp. 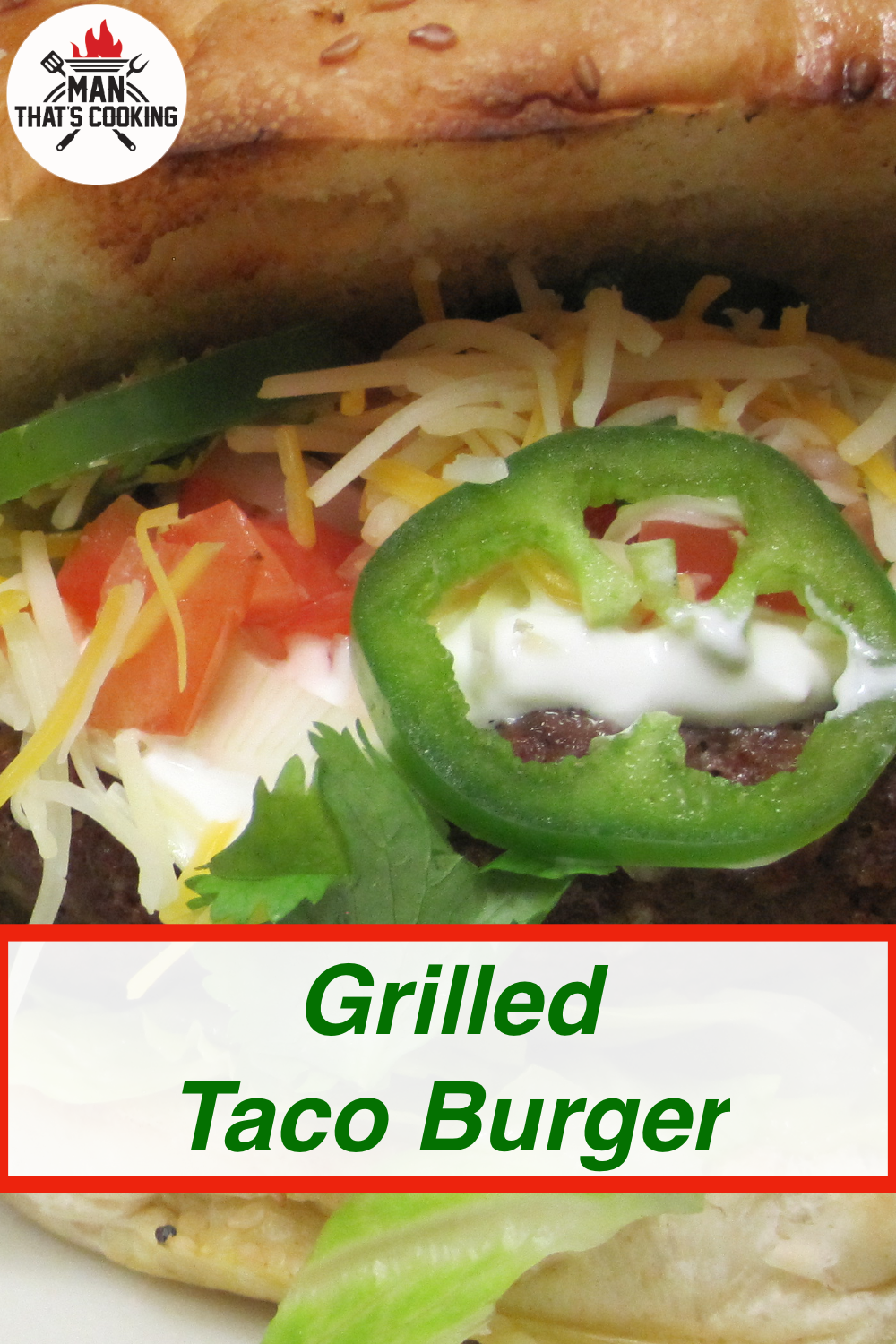 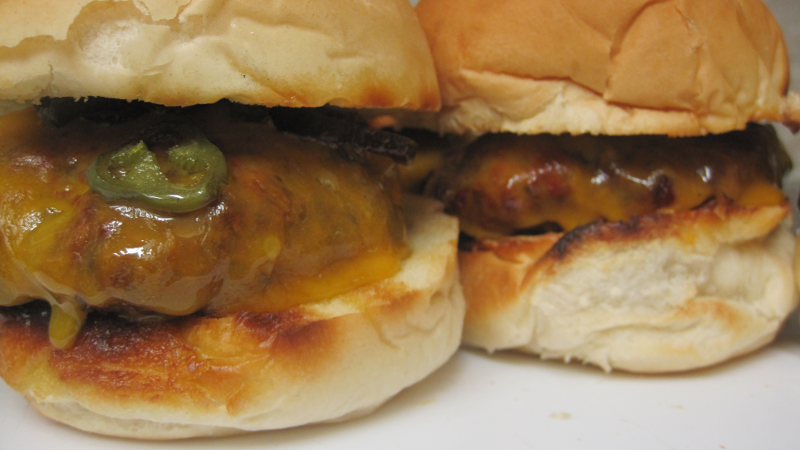 Tired of the same old plain back yard burgers? Then turn up the heat at your next cookout with this jalapeño cheddar burger recipe!


Mix the beef and ingredients together for about 1 minute until well mixed. Form the beef into 4 or 6 equal sized patties and place them on a cutting board. Add salt and pepper to the tops of the patties. Preheat your grill to 400 – 500 degrees and if you have any smoke chips or wood, use Mesquite.


Next melt a 1/2 stick of butter and brush the butter onto freshly sliced keiser buns. Next, add the jalapeno slices and 1/2 sick of butter to a small cast iron skillet. You can always skip this step and keep your jalapeno slices uncooked for that fresh crunchy effect.


When your grill is preheated, add the skillet of jalapeno slices to the grill. Next, grease the grill area and add the burger patties. Cook the burgers for 7 minutes, then flip and cook another 7 minutes. Stir the jalapeno slices and be sure to coat them with butter. Next, move the burgers to the top rack of your grill, flipping each patty once more, and cook them for another 2 to 4 minutes until they reach 160F. At this point, you may need to remove the jalapeno skillet depending on how done they look. Place 2 slices of cheddar on top of each burger. Next place the keiser buns on the grill. Allow everything to cook for another 2 minutes with the grill lid closed. Next, remove the buns and move the burger patties to the buns. Top the burgers with the jalapeno slices. For more kick add creamy horseradish sauce. 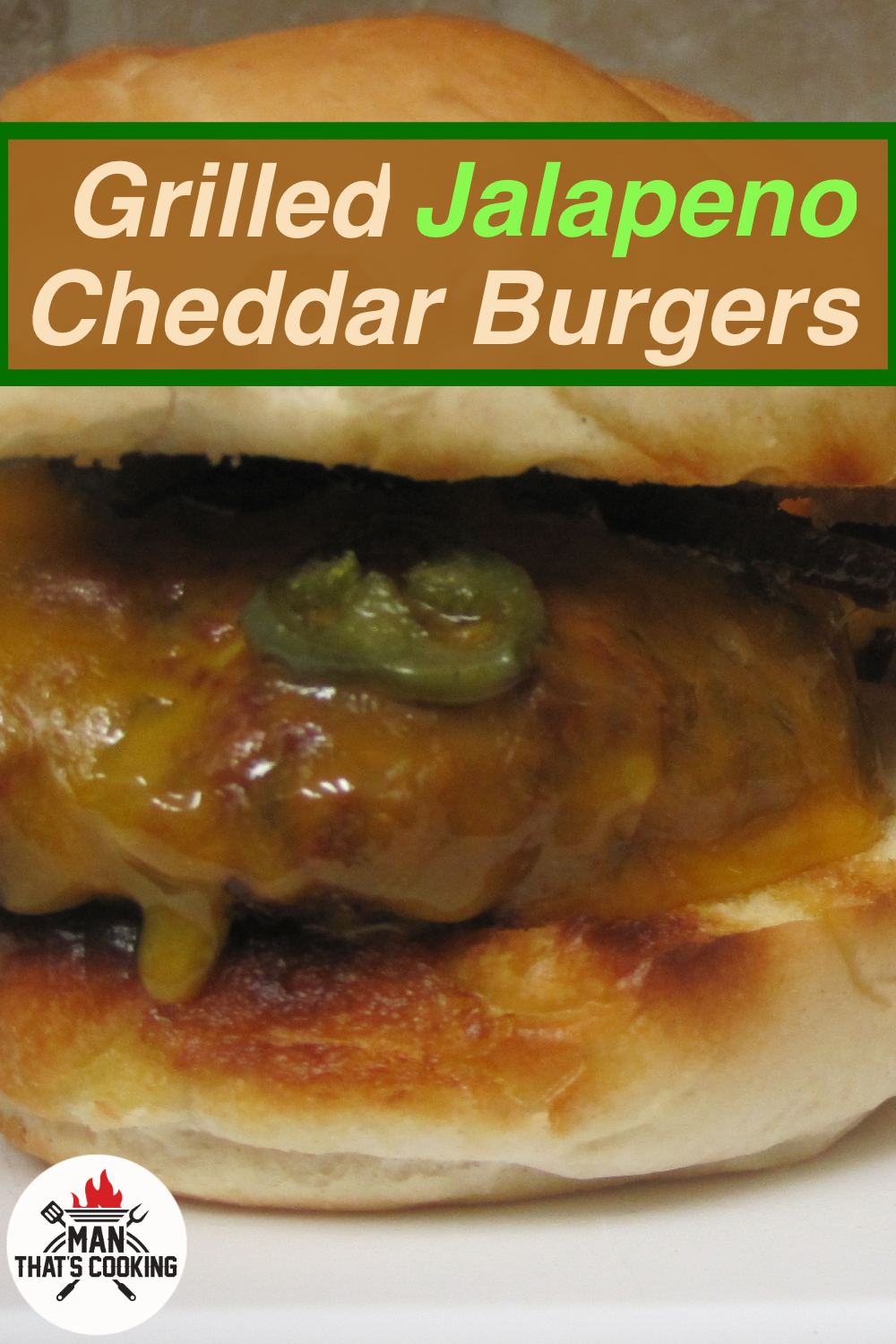