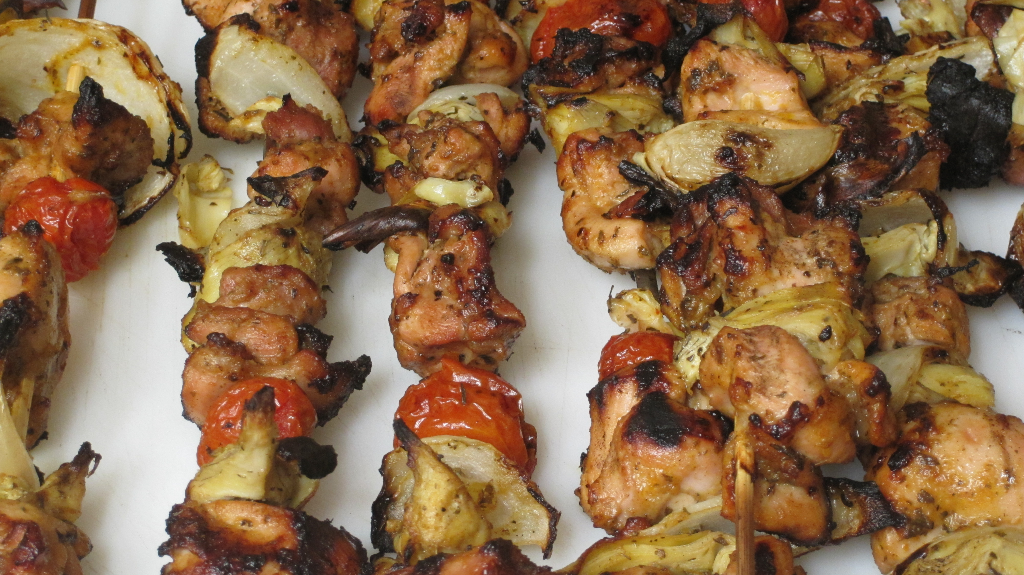 This is a great recipe that’s always a big hit at parties.  It takes a little bit of work to get this done, but the end result is pure bliss.

First, using kitchen scissors, cut each chicken thigh in half length wise. Next cut each strip into 3 bit size chunks.  Place the chicken strips in a Ziploc bag and add half a bottle of Lupo’s chicken marinade. Move the chicken around in the bag until all chunks of chicken are covered with marinade.  Place the bag of chicken in the refrigerator overnight or at least 8 hours.  Next open the can of artichoke hearts, and drain out all the liquid.  Empty the artichokes into a colander and allow them to drain for 20 minutes.  Next prepare a container with paper towels and place the artichokes on the paper towels evenly allowing all prices to rest and dry on the paper towel.  Cover the artichokes with a paper towel and press down gently to mop up additional liquid.  Place the artichokes in the refrigerator while waiting on the chicken to marinate. After at least 8 hours of marination it is time to put the kabobs together.  Peel the skin off a 1/2 of a yellow onion.  Cut this onion into 4 even chunks.  Following this, break up the onion and place in a bowl. Add the cherry tomatoes and artichokes to the bowl.  Next add 1/4 cup of olive oil to the bowl followed by salt, pepper, and 1/2 teaspoons of herbs de Provence.  Gently stir around the contents of the bowl until the seasoning and oil is evenly distributed over each item in the bowl.  Next it’s time to assemble the kabobs. Start with a kabob skewer and place a piece of marinated chicken on the stick. Follow this with an artichoke, a onion and finally a tomato. Repeat this until all chicken and veggies are used up and on a skewer.


Preheat your grill at a medium low setting (300 – 400 degrees).  Place the kabobs on the grill and let them cook for roughly 5 to 7 minutes per side.  These should be flipped at least 3 times, but ultimately this is up to you.  Be careful when flipping the kabobs, try to gently rock the kabob back and forth to loosen the contents off the grill. Be sure not to rip or tear off any parts of the kabob.